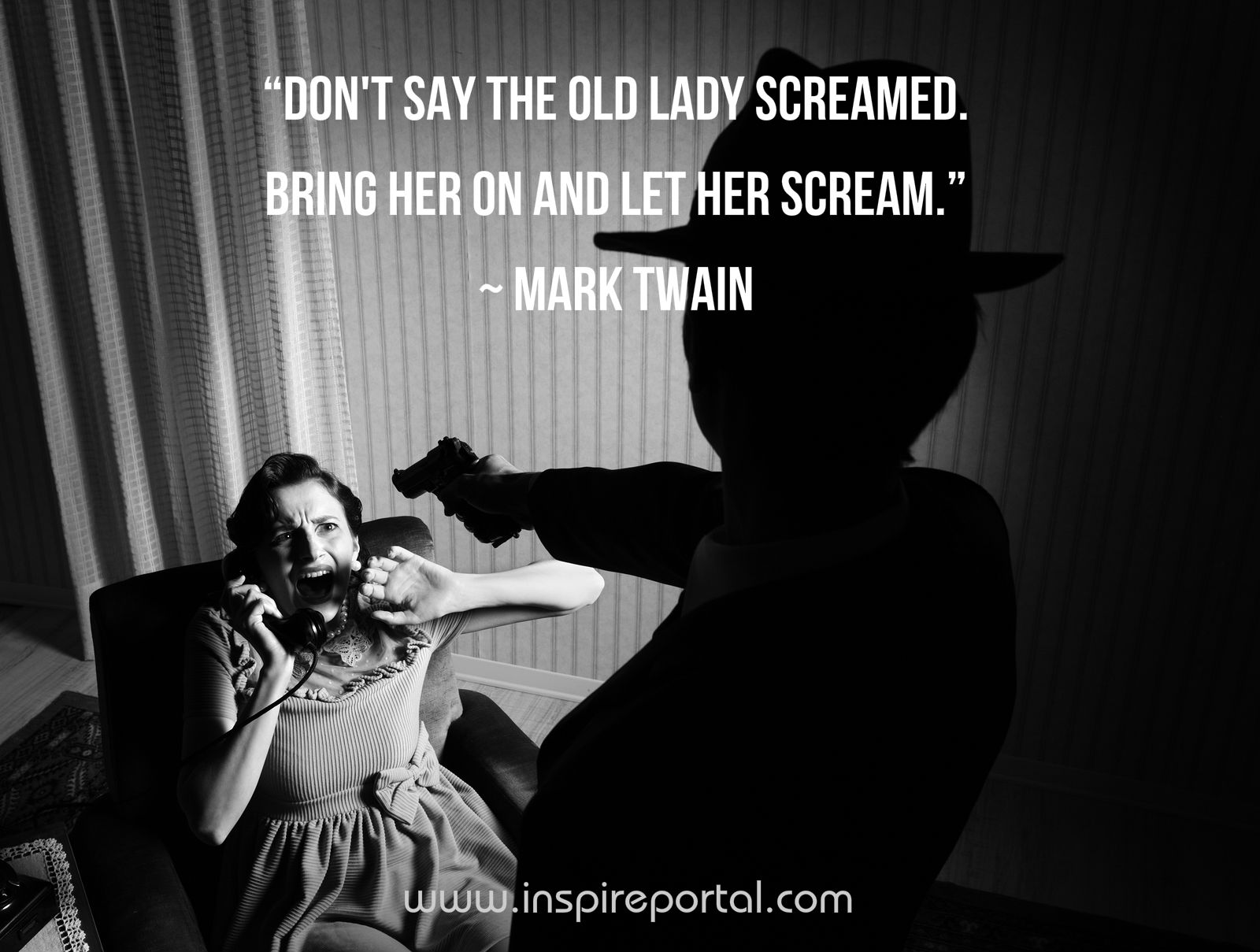 Needing no introduction (but having one anyway), Mark Twain aka Samuel Langhorne Clemens, was a novelist, literary critic, short story writer, essayist, lecturer, joker, pontificator and all round commenter on the great theatre that is life. Growing up with 19 cats can do that to you. Both his birth and death coincided with a passing comet.

“I came in with Halley’s Comet in 1835. It is coming again next year [1910], and I expect to go out with it. It will be the greatest disappointment of my life if I don’t.” He died on April 21, 1910, just two days after Halley’s Comet had reached its point closest to the Sun. In light of his uncontainable joie de vivre, I offer you this, a collection of Mark Twain’s wisdom and witticisms, with quotes on writing, books and life.

“Don’t say the old lady screamed. Bring her on and let her scream.”

“There was no crime in unconscious plagiarism; that I committed it everyday, that he committed it everyday, that every man alive on earth who writes or speaks commits it every day and not merely once or twice but every time he open his mouth… there is nothing of our own in it except some slight change born of our temperament, character, environment, teachings and associations”

“It takes a heap of sense to write good nonsense”

“Writing is easy. All you have to do is cross out the wrong words.”

“To get the right word in the right place is a rare achievement. To condense the diffused light of a page of thought into the luminous flash of a single sentence, is worthy to rank as a prize composition just by itself…Anybody can have ideas–the difficulty is to express them without squandering a quire of paper on an idea that ought to be reduced to one glittering paragraph.”

“There are some books that refuse to be written. They stand their ground year after year and will not be persuaded. It isn’t because the book is not there and worth being written — it is only because the right form of the story does not present itself. There is only one right form for a story and if you fail to find that form the story will not tell itself.”

“A man who is not born with the novel-writing gift has a troublesome time of it when he tries to build a novel. I know this from experience. He has no clear idea of his story; in fact he has no story. He merely has some people in his mind, and an incident or two, also a locality, and he trusts he can plunge those people into those incidents with interesting results. So he goes to work. To write a novel? No–that is a thought which comes later; in the beginning he is only proposing to tell a little tale, a very little tale, a six-page tale. But as it is a tale which he is not acquainted with, and can only find out what it is by listening as it goes along telling itself, it is more than apt to go on and on and on till it spreads itself into a book. I know about this, because it has happened to me so many times.”

“The time to begin writing an article is when you have finished it to your satisfaction. By that time you begin to clearly and logically perceive what it is you really want to say.”

“In a good bookroom you feel in some mysterious way that you are absorbing the wisdom contained in all the books through your skin, without even opening them.” 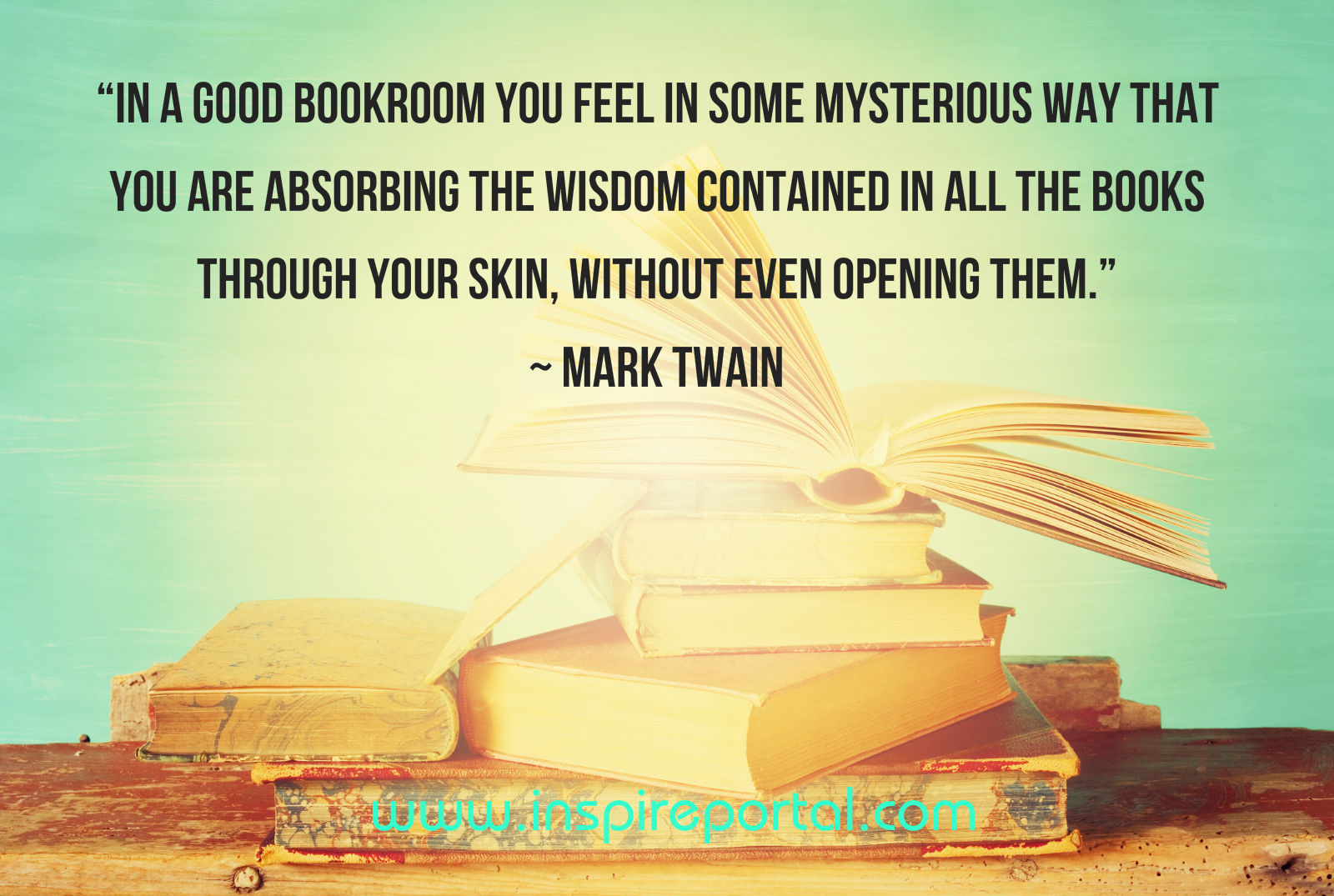 “There are some books that refuse to be written. They stand their ground year after year and will not be persuaded. It isn’t because the book is not there and worth being written — it is only because the right form of the story does not present itself. There is only one right form for a story and if you fail to find that form the story will not tell itself.”

“My books are water; those of the great geniuses is wine. Everybody drinks water.”

“It’s no wonder that truth is stranger than fiction. Fiction has to make sense.”

“A successful book is not made of what is in it, but what is left out of it.”

“Let us live so that when we come to die even the undertaker will be sorry.” 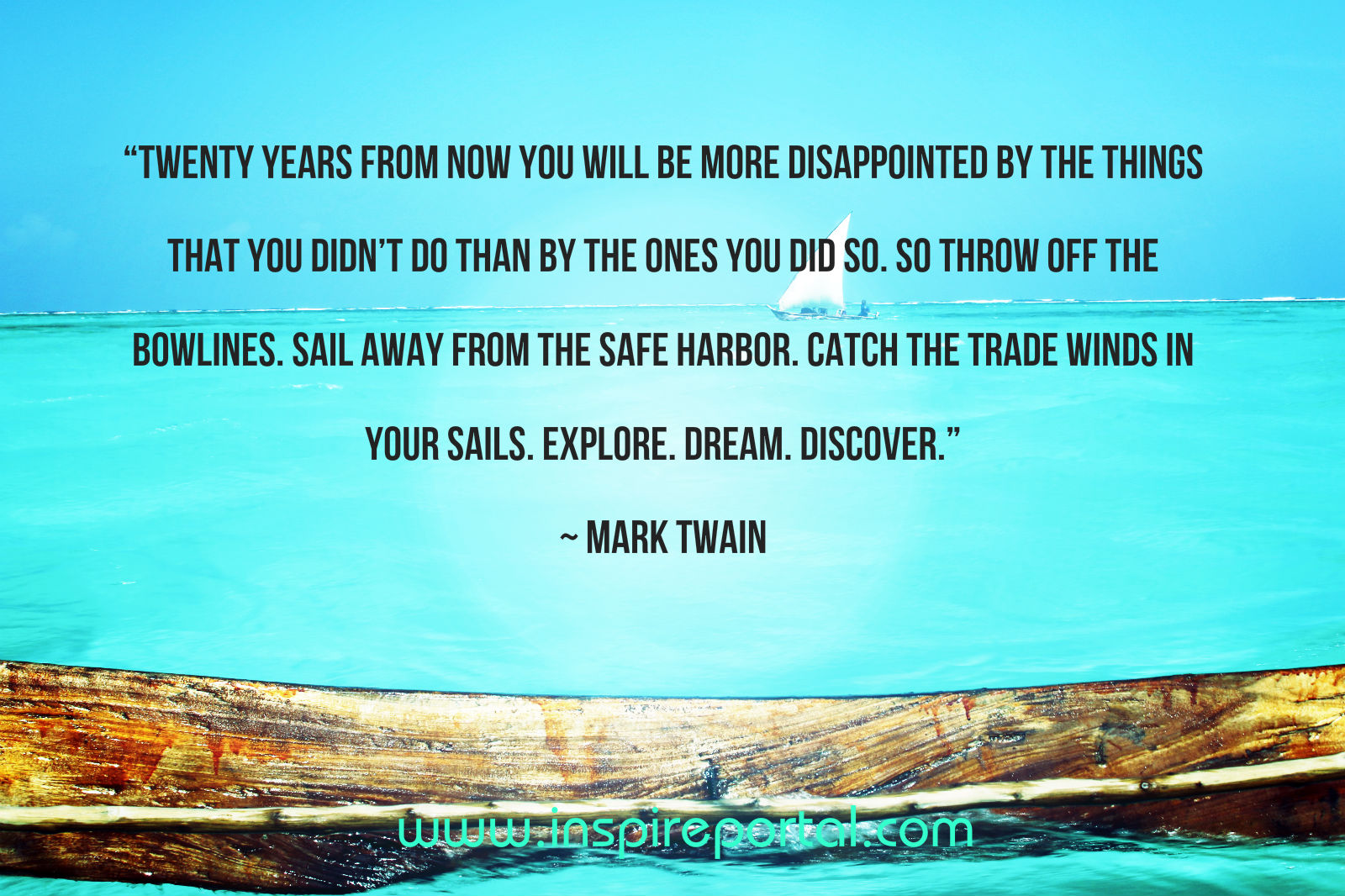 “Twenty years from now you will be more disappointed by the things that you didn’t do than by the ones you did so. So throw off the bowlines. Sail away from the safe harbor. Catch the trade winds in your sails. Explore. Dream. Discover.”

“When your friends begin to flatter you on how young you look, it’s a sure sign you’re getting old.”

“Always do right. This will gratify some people and astonish the rest.”

“A man cannot be comfortable without his own approval.”

“Age is an issue of mind over matter. If you don’t mind, it doesn’t matter.”

“Anger is an acid that can do more harm to the vessel in which it is stored than to anything on which it is poured.”

“Against the assault of laughter nothing can stand.”

“Life would be infinitely happier if we could only be born at the age of eighty and gradually approach eighteen.”

“Concerning the difference between man and the jackass: some observers hold that there isn’t any. But this wrongs the jackass.”

“There are many humorous things in the world; among them, the white man’s notion that he less savage than the other savages.”

“Of the demonstrably wise there are but two: those who commit suicide, and those who keep their reasoning faculties atrophied with drink.”

“I would rather have my ignorance than another man’s knowledge, because I have so much more of it.”

How Mark Twain became Mark Twain: The amazing story of the lectures that made him a superstar – Salon.com